CAN YOU USE CAST IRON ON AN INDUCTION STOVE? 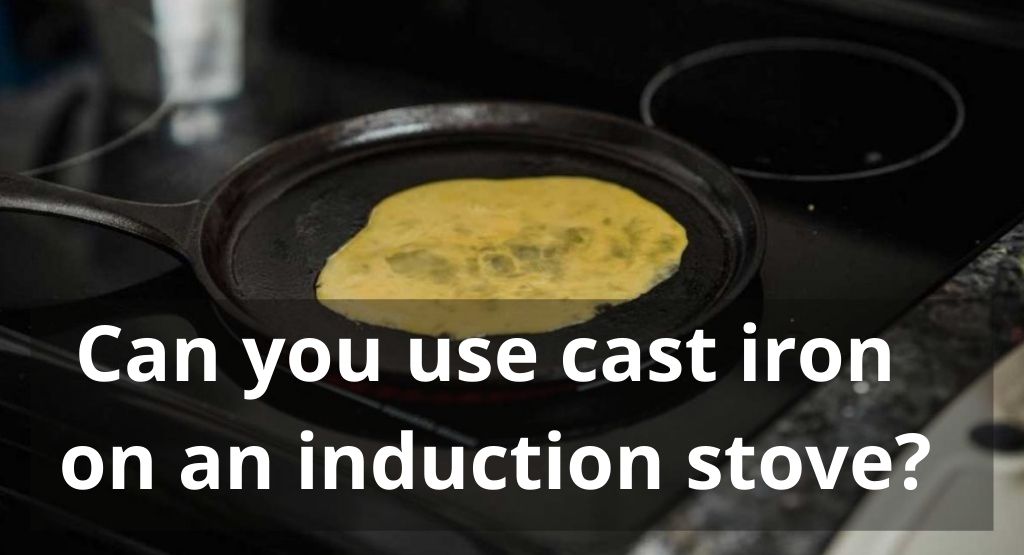 But if you’re like most people, you need additional information. You want to know how exactly cast iron is suitable for induction stoves. You may also be curious about other things, like the safety of induction cooktops, and best practices for using them.

We have you covered, because in this article, we’ll dive into all these aspects and you’ll understand how and why cast iron is such a great choice for induction cooktops.

How an Induction Stove Works

Induction stoves operate using some next-level technologies. Unlike regular cooking methods, this one doesn’t just generate heat on its own, and that’s what makes it so cool. In fact, it’s why people have adopted it so well –  that and its sleek and beautiful look.

As the name suggests, induction stoves operate using the concept of induction. That means it generates heat energy in the cooking ware through a magnetic field.

When you place a metallic object on the glass surface, the magnetic field transfers from the stove to the metal generating a current that quickly creates heat.

We say “quickly” because the process is surprisingly fast. Cooking with an induction stove is much swifter than cooking with any other traditional means, including gas burners and a hot plate.

As you might have guessed, induction cooktops need electricity to function, but what’s surprising is how much it actually uses.

As a heating source, you expect it to guzzle as much power as possible to manifest this new and improved way of cooking. Thinking of other heating sources like pressing irons and hot plates only makes this point further.

However, the assumption couldn’t be more false. Induction cooktops have up to 85-90% efficiency. That means all the energy they draw is directly translated to heat for cooking. That’s in contrast to gas stoves or electric stoves that only use 65-70% of their energy for cooking.

No, they’re not. It’s easy to think that they are once you hear the words “electromagnetic field”, but the field generated by induction cooktops is completely safe for humans.

In fact, it only affects metal objects that are close to the glass surface. So whatever you place on the surface gets instantaneously heated.

Will All Cookware Work With Electric Cooktops?

Unfortunately, no. Only magnetic cookware (made of ferromagnetic materials) will work. This includes cast iron pans and even dutch ovens. However, induction cookers can’t heat aluminium pans or stainless steel. Basically, if a magnet won’t stick, it won’t work.

Why Cast Iron is Great For Induction Stoves

When you think of cookware, what comes to mind? Pots and pans that are made of metal and glass, right? There are many kinds of cookware these days, and unfortunately, they don’t all work with induction stoves.

You see, the magnetic field in the stove only responds to magnetic cookware, and that’s why cast iron is such a great option.

It may be old-fashioned and designed for a different era, but it has magnetic properties. Magnets stick to it as they would to other metals. As a result, it can really take advantage of the magnetic field.

One more interesting thing about using cast iron on an induction cooktop is its incredible heat retention. This comes back to its old-timey nature.

Cast iron cookware was made in a time when heat sources were incredibly inefficient. As a result, they had to retain as much heat as possible to get the job done.

So if you combine the efficient heat of induction stovetops with the induction-compatible heat retention of cast iron cookware, you get a highly effective duo.

If you own cast iron skillets, you’ll know they aren’t the smoothest. That automatically means they may ruin your glass top with scratches and scrapes.

That’s not exactly something you want to see, especially with a cooking surface as beautiful as an induction stovetop.

The good news is that you’ll probably be cooking less often, thanks to heat retention and efficient conduction. That way, your stove top gets less exposure to scratches.

On the other hand, it only takes a few scratches every day to completely ruin a glass surface.

Unfortunately, poor conduction is a direct result of heat retention. Cast iron likes to take its time when conduction heat. As a result, it may take slightly longer to cook.

As a result of the poor conduction, you also don’t want to heat it too quickly. Doing this may form hotspots – a scenario where some parts of the pot are hotter than others.

Another consequence of this poor conduction is a slow response to heat or cooling. This means the pot remains hot for long after you’ve turned off the stove.

Users who don’t know this may get burned when trying to handle cast iron skillets.

The chipping from cast iron coats can come off very easily. This may occur due to regular use, but it can also be accelerated by overheating, sudden cooling, or hard impacts.

The good news is that we’ll be discussing some excellent strategies to prevent each of these disadvantages in the next section.

How to Handle the Downsides of Cast Iron Cookware

There are many strategies to keep your cookware from scratching the beautiful glass top. One of them is using a baking mat.

Baking mats are made of high-quality silicone and fiberglass. As the name suggests, they’re used to cover baking surfaces, but they’re equally effective for induction cooking stovetops.

The mat will keep the pot from scratching the glass and because the heating is done with magnetic materials, your food will still cook just as fast.

You can also file down the bottom of your cast iron skillet. That way, you only place a smooth surface on the induction cooker.

All you have to do is use slow cooking. As the heat builds up, it will spread evenly, eliminating the hot spots we discussed earlier. You can then crank things up a few notches using the heat setting.

You’ll also need to remember that your cast iron pans cool slowly. You can use oven mitts or any cloth to handle the pan and prevent a burn.

Another thing you can do is to season the pan. Cast iron seasoning involves adding a thin layer of melted vegetable oil.

To season your pan, you’ll first need to scrub and dry thoroughly. Next, spread a thin layer of melted shortening or vegetable oil over the skillet and place it upside down in an oven rack. Turn up the temperature to 375 degrees and let it bake for an hour.

At the end of the process, the oil will coat the inside of the skillet and provide a protective layer. You may need to repeat this process down the line, depending on how often you use your skillet.

How to Maintain Your Cast Iron Skillet

Maintenance begins with washing the cookware after every cooking session. We recommend that you just use hot water and a scraper to remove any leftover food in the pan. Also, avoid using a metal scourer because it can remove the layer of seasoning.

After washing, be sure to leave the pan out to dry before storing it. You want to store it with zero moisture so as to keep rusting at bay.

Another thing you can do for your cast iron skillet is to reapply the seasoning when it begins to disappear. This will make the pan last longer.

How to Maintain Your Induction Burner

Maintenance of an induction burner begins by simply cleaning it. To do this, first, allow it to cool down and then wipe spills from the countertop. You can also use some cleaner to remove stains and get a shiny surface.

Because the surface is glass, you should avoid using anything that might scratch or damage the surface. Some people love to use white vinegar to clean hard water spots off their induction burner surface.

Can you use cast iron on an induction stove? Even though the answer is yes, there are also other things to consider, like how much heat retention cast iron cooking ware actually have.

We hope our guide has provided you with valuable information! If you’re interested in similar topics, feel free to check out our other guides!